Natoli
Inflation. Bear markets. International conflicts. Fuel supply shortages. In today’s economic climate, we could cut the tension with a plastic knife. Those who are employed are facing a cost-of-living crisis, while their forward-thinking employers face an opportunity. On the tail of the Great Resignation, companies are looking for unique ways to show employees they can truly rely on their employers to provide in uncertain times. Happy hour with the boss, Bring Your Dog to Work Day (June 24th, by the way), and hybrid work schedules are just a few programs that companies have implemented to encourage workers to return to the office. But the question remains: On a human level, what are companies doing to meet employees’ basic needs in times like these?

“Employees who believe that management is concerned about them as a whole person – not just an employee – are more productive, more satisfied, more fulfilled. Satisfied employees mean satisfied customers, which leads to profitability.” — Anne M. Mulcahy – former CEO of Xerox

Recent studies have shown that business leaders who can empathize with their employees see reduced employee churn rates, and more productivity from those quality employees whom they retain. But with more companies also trying to incentivize employees to return to the office—despite double-digit gas inflation—employers and employees struggle to find a win-win compromise.

But in the St. Louis, Missouri metro area where Natoli Engineering is headquartered, where the average fuel price (per gallon) is nearly $2.00 higher than it was a year ago, President Dale Natoli took a more innovative and practical step to assist those who commute to work. On Thursday, June 2nd, Natoli Engineering implemented a temporary Gas Assistance Subsidy (G.A.S.) Program, which aims to subsidize the cost of fuel for employees’ commutes.

A Little of the Old Normal

“This (Program) is really innovative. I don’t think there’s another company in the St. Louis area that’s doing anything like this. Our (Natoli’s) innovation goes beyond our tooling, it includes (taking care of) our people, too.” — Natoli Employee

The individual benefit amount will be calculated as the difference between the cost of regular unleaded gasoline from one year ago—which is being used as the baseline for gas prices—and the weekly average price of regular unleaded gasoline per gallon in Missouri. Most of the company’s employees can expect a reimbursement of about $20 each week, but others may see even more. Calculation of the reimbursement amount considers the following factors: 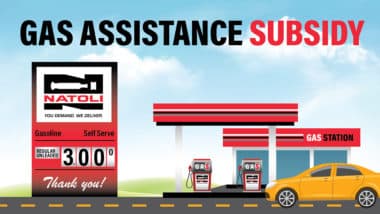 When first announced, some praised the G.A.S. Program for being “extremely generous.” When polled about the Program, other employees used words like “considerate”, “smart”, “helpful”, “thoughtful” or just simply “amazing” to describe it.

All Natoli employees across the country are eligible to receive the reimbursement, whether they’re at a Technical Center in New York or California (where some have reported gas prices approaching $10 per gallon) or Natoli Engineering’s research arm, Natoli Scientific in Telford, Pennsylvania. The G.A.S. Program will remain in effect until stability in Missouri gas prices has returned. When fuel prices no longer cause a hardship for employees, the G.A.S. program will be discontinued.

“How can you not afford this?…you got a great work staff, you want to mitigate their hardship as much as possible. And so, we don’t see it as really as an expense, we see it as a benefit.” — Dale Natoli

While the Program’s primary goal is to lift the burden of fuel costs from employee’s wallets, Dale Natoli hopes other companies in the St. Louis area and beyond would be encouraged to create programs like G.A.S.

It may help to relieve the short term financial strain, but the Program goes beyond a simple transaction. It strengthens a relationship between employer and employee. This human, relational element of the G.A.S. Program is why it stands to do more than just put money back in people’s wallets.

Have I told you you’re awesome? Thank you so much for your efforts. Please extend my appreciation to all.